*Returning Players must register by January 15 to guarantee placement on their current team.

What do fees cover? 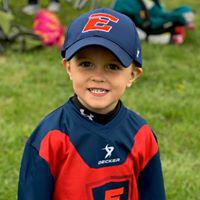 *In the interest of player health and safety, EAA follows area protocol and requires each player to purchase and provide their own helmet.

Evolution Baseball is a recreational league for players ages 4 to 18. Team rosters are generally formed with players that attend the same school within the Elkhorn School District.  Players can make team, coach & buddy requests in the registration. Evolution teams generally play against other EAA teams; however players in the 9-18 age groups may play teams outside of the EAA.

5U Division is a Developmental Division: Games/Practices will be Saturday at the Hillrise Elementary baseball fields. The first half of a team's dedicated time slot is set aside for practice and the last half is set aside for a tee-ball game.

*NEW FOR 2020 - PLUS Division Registration: Teams or Individual players can register for our Evolution PLUS division.  These teams will play a higher level of competition and are also eligible to play in tournaments. NOTE: Tournament Entry Fees are not included in the EAA Registration Fee; these are paid by the team.

EAA High School teams, 16U-18U, will play teams in the MABL (Metro Area Baseball League).  The 16U (15/16) and 18U (17/18) Divisions play teams from across the greater Omaha area. Players will register and participate in a Placement Practice to be assigned to teams - there are no tryouts for our EAA MABL Teams.
Registration closes: TBD
Placement Practice: TBD

The Evolution season begins with practices in late March and early April. Games generally begin in May and run through the end of June.  Game & Practice days will vary and we can not guarantee a player or team playing on specific days.   Our goal is to have Practice and Game Schedules set by our First Pitch Event.

PLUS tournament games listed below (these are games in addition to Regular Assigned Games)!

The Elkhorn Training Camp is a new facility in Elkhorn across from The Marc that allows for indoor training for your athlete. The ETC is not owned or managed by the EAA. The EAA is a customer of ETC. We work with them to provide EAA athletes indoor training, practices and clinics during the winter months. Learn More about ETC.